Welcome to Walking Awake, “Queen of the Faeries” Blog!

Hello Friends! I’m Denise, the creator of Walking Awake and I am thrilled that you have found your way to “walking awake” with us! If you have had the opportunity to read my book, or have attended one of our workshops or pilgrimages you have seen a glimpse of how I see and connect with Nature, and how Nick and I weave together our love of adventure, Nature, poetry, story, song, words from the wisdom keepers, and all things Celtic into all we do. 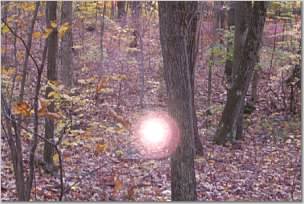 We’re new at blogging however, both Nick and I look forward to sharing some of our Walking Awake moments here with you and we hope you will stop back and check-in from time to time to see what we have posted!

Oh! Why the Queen of the Faeries”? Well, as I mention in my book, a dear friend of mine gave me this nickname many moons ago! She said it was because of my ability to see things 'differently', my magical connection to kids and animals and Nature, and my belief and persistence in discovering the magic in everyday life. Initially, I resisted the nickname however, over time, I have learned to love and embrace this beautiful archetype and to accept its presence in my life.

I look forward to sharing a magical moment with you very soon!

May we always “Walk Awake”!

*If you would like to receive our weekly "Walking Awake in Nature Meditation” email featuring photos of our adventures and the Nature we meet along the way coupled with age old Nature quotes and meditations, drop me an email and I will add you to our list!

'Truth is a Pathless Land': Blog by Nick Prance of Walking Awake, LLC

Hello, my name is Nick and this is my first blog for Walking Awake and I'm delighted to be sharing this venture with my lovely partner in life, Denise, aka 'the Queen of the Faeries'!

I love the work that Denise and I are developing together, in fact to refer to it as work is not quite right, it is a way of living and being that we have been moving towards for a long time, one which embraces the present moment in whatever way it arrives. Of course this is not new terrritory, many wise people both historical and contemporary advocate the present moment as the only thing we can truly know, and indeed the one 'truth' there is. Everything else being an idea, a concept, a doctrine or belief, fingers pointing at the moon, to use a Buddhist metaphor.

I am conscious however that 'living in the moment' can become a glib mantra and something we are more often than not unable to do, preoccupied as we are by thoughts of past and future, ruminating endlessly and unhelpfully about the random, often irrelevant subjects that the mind produces. I know this to be true as I spent much effort struggling to make real the skill that I had developed of talking about being fully present to life!

My career of thirty years was in the field of mental health and time and again over that period I witnessed how people's lives were blighted by an inability to differentiate between those thoughts we need to give time to and those which require letting go of, and the sooner the better. Knowing and doing are of course seldom the same thing and this is where a 'practice' or a discipline comes in, or perhaps a wonderful 'aha; or 'eureka' moment after which we simply 'see' differently knowing that we can never return to a former conceptual way of being.

It was in this light that Denise and I, who had been on our separate, but in some ways similar paths met and delighted in discovering we had a complementary way of understanding our journey in life. I had travelled my road into and out of organised religion and found realisation of a very simple, very contented way of living that requires no 'way', but rather an appropriation of what Krishnamurti meant when he referred to truth as being 'a pathless land', and Denise who through her connection to nature experienced the profound wisdom and healing that the natural world can bring us.

Together we are now leading pilgrimages, journeys taken to ancient and special places as we 'walk awake' seeking to be fully present, letting the natural world and its energy be our teacher, and learning from each other as in the spirit of celebration and fun we share our wonderful human connection. It would be a privilege to have you join us.

The spring view from our living room window is gorgeous; green fields filled with sheep bordered by woods with the North Sea in the distance. Recently, the Scottish 'haar' came for a visit...a long visit. A 'haar' (pronounced haa) is a low sea fog formed when the warm air blows over the cold sea, then blowing inland. This time of year, it becomes light around 4am and dark around 11:30pm. For four consecutive days, the haar arrived at the break of day and remained a steady neighboring presence. No sun, no view out our window - just HAAR. So, we decided to hop in the caravan and go for a short holiday to escape from the gloomy fog.

We headed south along the coast down into England to a caravan site near Robin Hood's Bay. Robin Hood's Bay is known for its smuggling history, fishing and even more so for fossil digging along the shore side. Our first day was sunny and warm. Nick put on shorts and I put on a sundress. We BBQ'd on the grill and toasted to the return of the sun with our new neighbors in the field next to us - two alpacas and a goat. The next day we walked down (and I mean down - waaay down) from our campsite to the bay. It was a quiet peaceful walk along country single track roads with picturesque views of the Bay. Again, it was a nice day; not as much sun and a few spits of rain, which to us was fine. No fog in sight! We strolled along the beach, scouted around for treasures; stones, shells and fossils, then made our way up (waaay up) out of the bay back toward our caravan as the dreaded haar began to once again set in on us. GRRRR...NOT MORE HAAR! Did it follow us? Our initial reaction was disapointment as we settled in for the night. Visibility out our caravan window was no more than 15 feet yet just clear enough for us to spy a barn owl swooping down and hovering over the field - so close we could see it's face! It was simply majestic and appeared to be mysteriously floating against the backdrop of the thick misty fog. The stillness of the evening inspired me to journal. Before bed I wrote: FOG! FOG! FOG!!! Left it in Scotland and it followed us here!!! GRRR! Let's call it...FOG-ZILLA!!! - Clearly, the return of the fog was beginning to get to me.

I dreamt a lot that night - about the owl, about the haar and when I woke the next morning, i wrote this:

June 4th, 2018: It's STILL HERE! Geez, go away fog! It's really starting to get us down. It feels so heavy, gloomy, eerie. Yet, in someways it reminds me of a snow storm and its hidden gifts; visibility is limited and it quiets things down. It offers a stillness to the otherwise busy-ness of life.

It certainly brings great attention to presence - you simply can't see anything further than the here and now. Sometimes as you walk across a foggy field you can barely make out your own feet. You have to rely on the assistance of your other senses to move forward; 'listening' for familiar sounds, 'feeling' your way with your feet moving them slowly...one...at...a...time. When the fog is that thick you have to make sure each step is without obstruction and fully grounded before placing the other. Sound carries differently in the fog; it's more crisp, more defined - the pheasant in the bushes, the raven flapping it's wings as it passes.. So crystal clear. 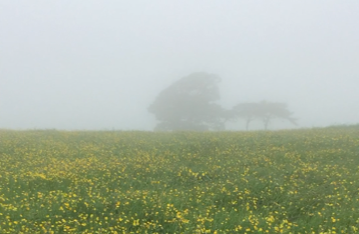 The thick wall of fog begins to toy with us. Several times it looks as if it is about to leave us and we excitedly begin to make out silhouettes of buildings, barns, the field fences and even the somewhat ominous cut-out shapes of fading trees on the horizon. These all come and go. Appear and disappear. The haar remains. 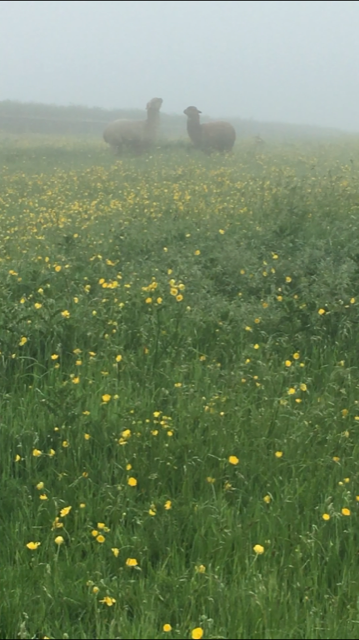 I can't help but compare our being consumed by this cloud as a literal immersion into the lessons of presence. Nature is just being Nature. Just 'being'. I begin to marvel at the simplicity of it all compared to our human mind - busy with our control and planning, always working on our show-like production we believe we are writing, directing and producing - the show we call life. Nature is just being Nature.

It's creeping closer again...the alpaca doesn't seem to mind, he looks just as steady as he did when it was sunny and hot. He just continues to stare, occasionally lying down in the grass and rolling around to scratch his back. He still carries himself the same - like a wise old sage - not really 'doing' - just 'being'. The wind is stirring the grass in the fields. I can still make out the bright yellow of the tall buttercups - they appear to be dancing with the wind in the company of the fog. The raven just flew by - close by my window - just flying, just being Raven. The birds are still singing their beautiful songs, perhaps even more crisp as the outline of the fence and the shape of the distant trees begins to fade once again. Nature isn't letting the fog get it down. Nature is just being Nature.

Click HERE to view a short meditative video of the 'HAAR'.

May you ALWAYS 'Walk Awake'! ~ Denise

We're in the process of planning the following Scotland pilgrimages. Drop us an email if you are interested, spaces will be limited!

A Pilgrimage to the Ancient Sites of Orkney: April 2023.

A Pilgrimage to the Isle of Iona featuring a day visit to the Kilmartin Valley, and time in Oban: May 2023. 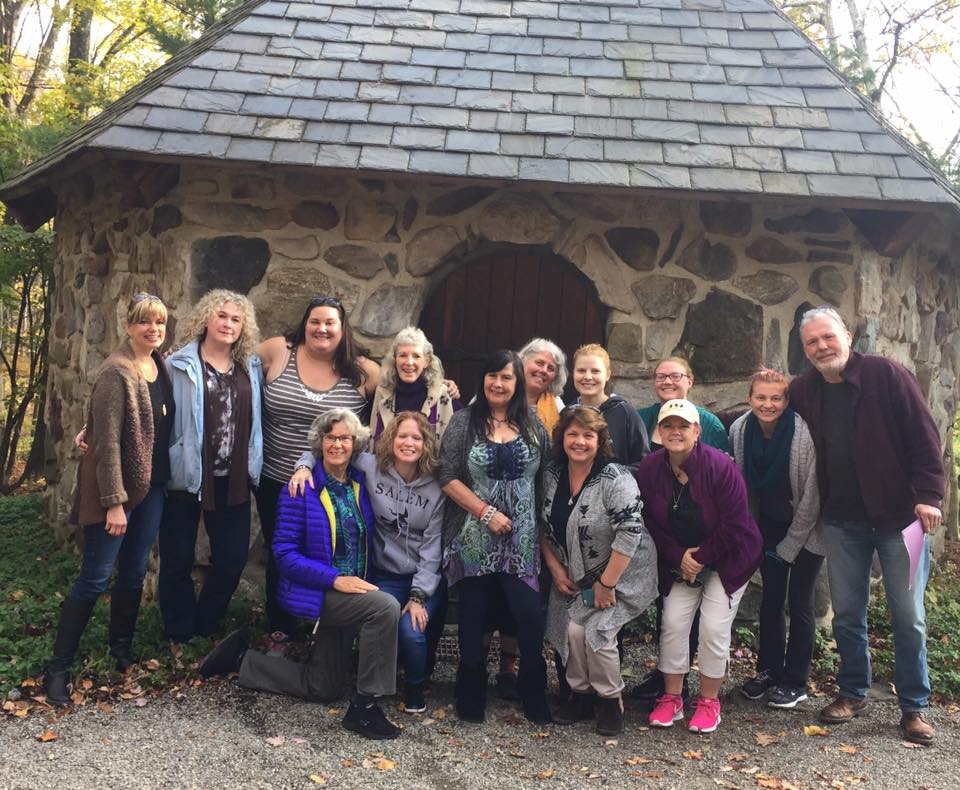 A Weekend Retreat in Pennsylvania, U.S.A.

Place your deposit or make a payment in full

Walking Awake will come to YOU!...

Walking Awake offers a variety of retreats and workshops at various locations throughout the US and UK. We love to travel for book signings, guided walks in nature, workshops, and retreats. For more information contact Denise. 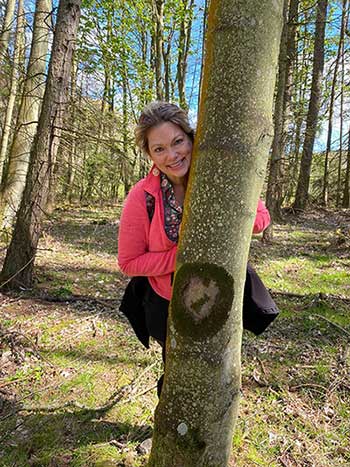